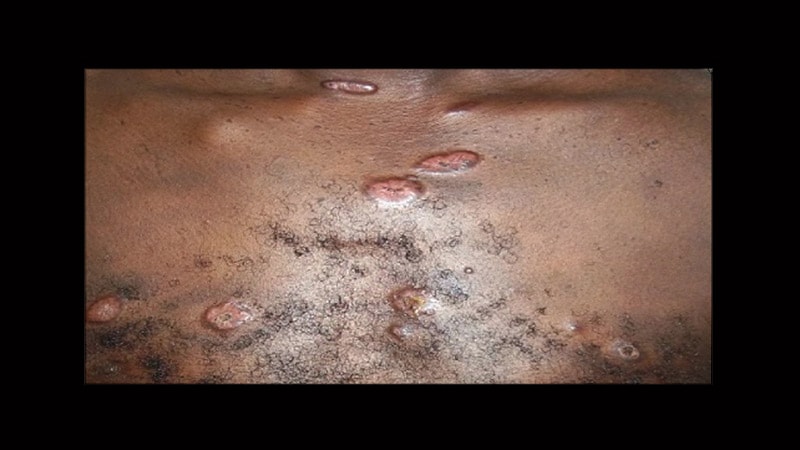 Black patients diagnosed by dermatologists with cutaneous sarcoidosis were significantly more likely to have unrecognized systemic organ involvement than were non-Black patients, according to a retrospective chart review of patients seen at Massachusetts General Hospital and Brigham and Women’s Hospital, both in Boston.

Black patients were also significantly more likely to have two or more organs involved and have higher rates of cardiac involvement, the latter of which is associated with worse prognosis. “Our data suggest there may be substantial variations in organ involvement between racial groups of patients presenting with cutaneous sarcoidosis,” said medical student Kylee Kus, a medical student at Oakland University, Auburn Hills, Mich., who presented the findings with Bina Kassamali, a medical student at Harvard University, Boston, at the annual Skin of Color Society scientific symposium.

The researchers identified 111 patients who were diagnosed with cutaneous sarcoidosis over a 20-year period (January 2000–December 2019), 50 of whom presented without established extracutaneous disease. They examined the charts of these 50 patients for whether subsequent work-up revealed systemic disease.

Black patients are known to be at higher risk for sarcoidosis than non-Black patients, and because “there is an association between cardiac sarcoid involvement and poor prognosis largely due to manifestations such as heart block, arrhythmias, and heart failure … the study helps demonstrate how this organ involvement can disproportionately affect the Black population,” Ms. Kassamali said in an interview after the meeting.

A separate, recently published analysis of data from the same patient population examined the work-ups that patients received after a dermatologist’s diagnosis of sarcoidosis and found that patients with no previous systemic work-up were subsequently assessed for cardiac involvement in only 58.3% of cases. Assessment for pulmonary and ocular disease was completed more than 90% of the time.

“Crucial testing for cardiac involvement fell short,” Imadojemu, of the department of dermatology, Brigham and Women’s Hospital, and coinvestigators wrote in the research letter.

Pulmonary involvement occurs in nearly all cases of sarcoidosis, while ocular and cardiac disease develop in approximately 25% and 10% of patients, respectively. Cardiac sarcoidosis is usually asymptomatic and accounts for 13%-25% of sarcoidosis-related deaths in the United States, they wrote.

An electrocardiogram is the appropriate initial screening tool and “is warranted in all patients with sarcoidosis,” they advised.

This article originally appeared on MDedge.com, part of the Medscape Professional Network.

New Advice for Blood Pressure That’s a Bit Too High

Tailgate Gear to Flip Your Automotive Right into a Day Lodge...

You Handed Your GFI Examination, Now What?

Staying Energetic within the Winter of COVID-19

Lasting Norovirus Immunity May Depend on T Cells