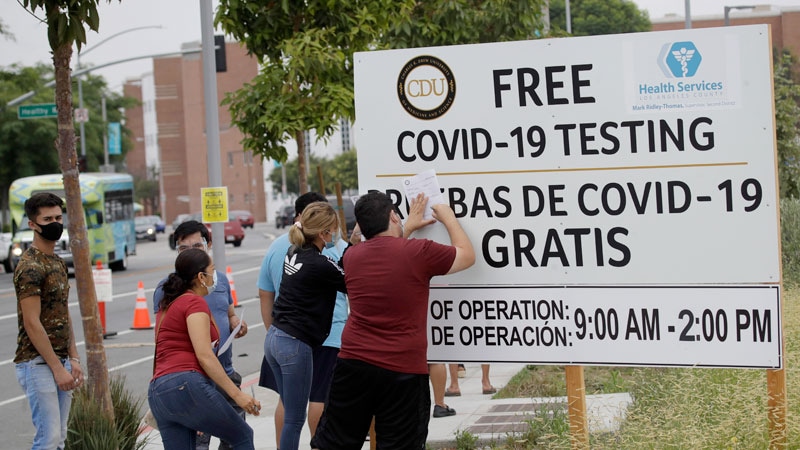 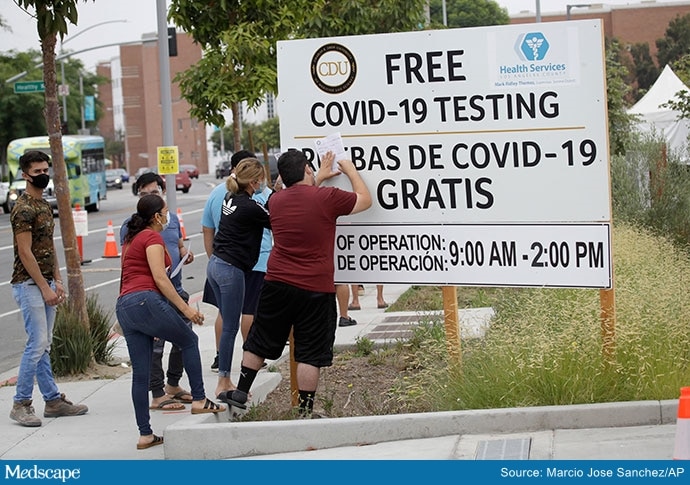 People fill out forms at a mobile testing site at the Charles Drew University of Medicine and Science amid the coronavirus outbreak in Los Angeles.

Bloomberg is a billionaire who made his fortune with the news and financial media organization that he owns.

The money comes months after Bloomberg announced plans to give the schools $100 million over the next four years, with grants going to alleviate the debts of 800 individual students. He pledged $34 million to Meharry, $32.8 million to Howard, $26.3 million to Morehouse and $7.7 million to Drew.

Each of the schools will use the money to buy additional mobile vaccination units to expand current community outreach efforts. The vehicle is key because it helps provide refrigeration for vaccines, said Morehouse School of Medicine President and Dean Valerie Montgomery Rice.

Vaccination rates are lagging in many African American communities, but many leaders say fears that Black people would refuse the vaccine out of distrust have eased. A Census Bureau survey showing African Americans intend to get the vaccine at almost the same rate as the population at large.

Instead, people may be having trouble accessing the vaccine. Bloomberg said the four schools have deep relationships with Black communities and can be trusted providers of the vaccine in underserved areas, in partnership with churches and other institutions.

“COVID-19 has been devastating to the health and economic wellbeing of many Black families – and right now, increasing equitable access to vaccines is one way we can serve the needs of those who need it most,” Bloomberg said in a statement.

Morehouse has vaccinated 5,200 people so far, but Rice said the grant will allow the school to increase the number of shots it gives by 500 to 1,000 a week

“We have been doing this at a snail’s pace, but with these additional monies, we are able to hire additional people,” she said.

Rice said Morehouse plans a clinic at a nearby mall and at other locations on the predominantly Black south side of Atlanta.

The schools say they will also focus on easing access for people who are homebound or who can’t use the internet to make appointments. Thus far, Drew has vaccinated 52,000 people, while Howard has vaccinated 25,000 and Meharry has vaccinated 3,500 people.

“Minority communities have historically suffered from medical mistreatment and lack of access to quality health care but are now expected to trust a system that has neglected them for decades,” Meharry President Dr. James E.K. Hildreth said in a statement, adding that his school seeks to “break this cycle and establish trust throughout our communities.”

The gift comes from Bloomberg’s Greenwood Initiative, named for the African American neighborhood in Tulsa, Oklahoma, that was the site of the 1921 Tulsa Race Massacre. The initiative seeks to build generational wealth for Black families and increase investment in Black communities and institutions.

Ohio Is Offering Vaccinated Adults a Chance to Win $1 Million

Opposing Views for Withdrawal of Approval of Preterm Drug