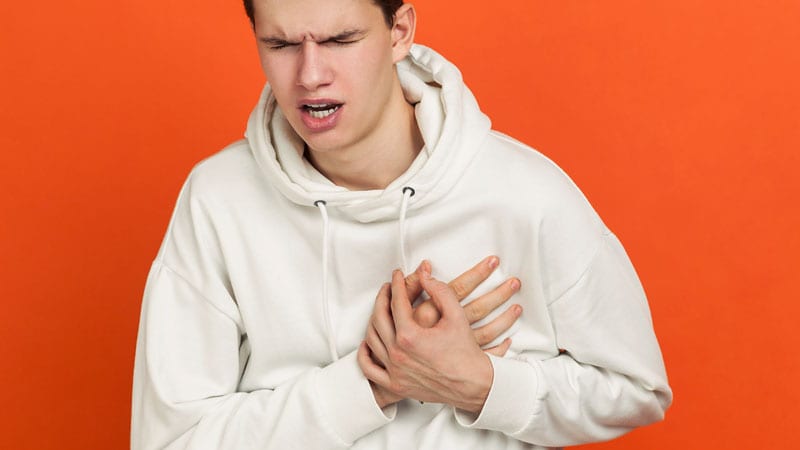 Swelling of the heart appears to be a very rare side effect that primarily strikes young people after vaccination for COVID-19, a Centers for Disease Control and Prevention (CDC) expert reported on Thursday, detailing data on cases of myocarditis and pericarditis detected through a government safety system.

The side effect seems to be more common in teen boys and young men than in older adults and women and may occur in 16 cases for every 1 million people who got a second dose, said Tom Shimabukuro, MD, MPH, deputy director of the CDC’s Immunization Safety Office, who presented information on the cases at a meeting of an expert panel that advises the US Food and Drug Administration (FDA) on vaccines.

Telltale symptoms include chest pain, shortness of breath, and fever.

William Schaffner, MD, an infectious diseases specialist from Vanderbilt University in Nashville, Tennessee, thinks certain characteristics are pointing toward a “rare, but real” signal. First, the events are clustering, occurring within days of vaccination. Second, they tend to be more common in males and younger people. Third, he says, the number of events is above the so-called “background rate” — the cases that could be expected in this age group even without vaccination.

“I don’t think we’re quite there yet. We haven’t tied a ribbon around it, but I think the data are trending in that direction,” he said.

The issue of myocarditis weighed heavily on the Vaccines and Related Biological Products Advisory Committee’s considerations of what kind and how much data might be needed to green light use of a vaccine for COVID in children.

Because the rates of hospitalization for COVID are low in kids, some felt that the FDA should require at least a year of study of the vaccines in clinical trials, the amount of data typically required for full approval, instead of the 2 months currently required for emergency use authorization.  Others wondered whether the risks of vaccination — as low as they are — might outweigh the benefits in this age group.

“I don’t really see this as an emergency in children,” said committee member Michael Kurilla, MD, PhD, the director of clinical innovation at the National Institutes of Health. Kurilla, however, did say he thought having an expanded access program for children at high risk might make sense.

Most of the young adults who experienced myocarditis recovered quickly, though three needed intensive care and rehabilitation after their episodes.  Among cases with known outcomes, 81% got better and 19% still have ongoing symptoms.

The data on myocarditis come from the Vaccine Adverse Events Reporting System, or VAERS, a database of health problems reported after vaccination. This reporting system, open to anyone, has benefits and limits. It gives the CDC and FDA the ability to rapidly detect potential safety issues, and it is large enough that it can detect rare events, something that’s beyond the power of even large clinical trials.

But it is observational, so that there’s no way to know if problems reported were caused by the vaccines or a coincidence.

But because VAERS works on an honor system, it can also be spammed and it carries the bias of the person who’s doing the reporting, from clinicians to average patients. For that reason, Shimabukuro said they are actively investigating and confirming each report they get.

Out of more than 12 million doses administered to youth ages 16 to 24, the CDC says it has 275 reports of heart inflammation following vaccination in this age group. The CDC has analyzed a total 475 cases of myocarditis after vaccination in people under age 30 that were reported to VAERS.

Younger age groups have only received about 9% of the total doses of the vaccine so far, but they represent about 50% of the myocarditis cases reported after vaccination. “We clearly have an imbalance there,” Shimabukuro said.

The number of events in this age group appears to be above the rate that would be expected for these age groups without vaccines in the picture, he said, explaining that the number of events are in line with similar adverse events seen in young people in Israel and reported by the Department of Defense.  Israel found the incidence of myocarditis after vaccination was 50 cases per million for men ages 18 to 30.

Another system tracking adverse events through hospitals, the Vaccine Safety Datalink, didn’t show reports of heart inflammation above numbers that are normally seen in the population, but it did show that inflammation was more likely after a second dose of the vaccine.

“Should this be included in informed consent?” asked Cody Meissner, MD, a pediatric infectious disease specialist at Tufts University, Boston, Massachusetts, and a member of the FDA committee.

“I think it’s hard to deny there seem to be some event that seems to be occurring in terms of myocarditis.” he said.

Meissner said later in the committee’s discussion that his own hospital had recently admitted a 12-year-old boy who developed heart swelling 2 days after the second dose of vaccine with a high level of troponin, an enzyme that indicates damage to the heart. His level was over 9. “A very high level,” Meissner said.

The CDC has scheduled an emergency meeting next week to convene an expert panel on immunization practices to further review the events.

In addition to the information presented at the FDA’s meeting, doctors at Oregon Health and Science University recently described seven cases in teens — all boys — who developed heart inflammation within 4 days of getting the second dose of the Pfizer vaccine.

The study was published today in the journal Pediatrics. All the boys were hospitalized and treated with anti-inflammatory medications including NSAIDs and steroids. Most were discharged within a few days and all recovered from their symptoms.

Learn how to Make Clear Ice at Residence for Cocktails

Why Endurance Athletes Like Ryan Kempson are Obsessive about “Quickest Identified...

Rethinking the hyperlink between cannabinoids and studying

This Photographer Risks His Life To Save Our Oceans

AstraZeneca delays filing for US authorization of COVID shot